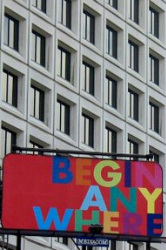 After expanding (to capacity) the urbanization unit in high school Global Geography, I later fell in love with Child-friendly Cities during my work with UNICEF Canada. Since I couldn't get enough, I enrolled in the urban design program at Daltech. Although I was later accepted into the Masters program, I had to withdraw for personal reasons. I also served on the Urban Planning committee for HRM District 12 (now new District 7), until I moved outside the district.

I hope you will see that they have heart:

Thinking about the future of Agricola:
Individual Final Report Cover 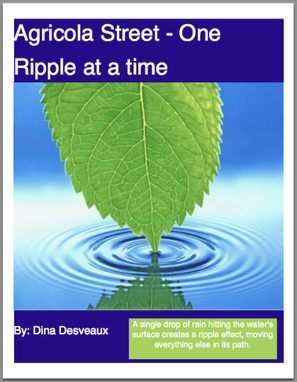 The idea behind this project was to research a Halifax neighbourhood experiencing rapid development shifts & to  consult with citizens with a view to proposing a way forward.

Thinking about the future of Agricola: Group Work 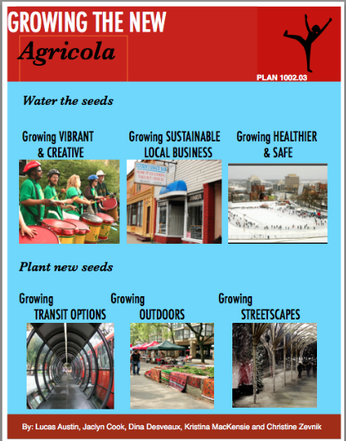 In the first stage of the project, we were divided into groups. Within our groups we divided research tasks and came up with:

The 3 main gems (assets) in the Agricola community, and;

The report proposed ways to further support the assets (water the seeds) and how to address the challenges by planting new seeds.

Thinking about the future of Agricola Concept Poster 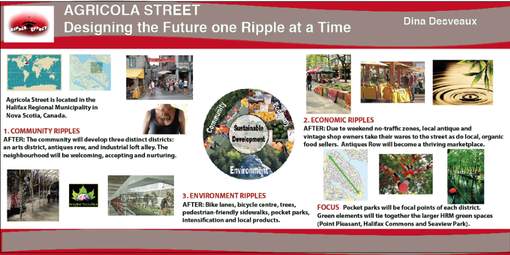 I also elaborated on each of the 3-pronged approach (think footstool). Here's the elaboration of the Pocket Park Concept.

Had so much fun with this project! Ended up making up a newsletter of possible futures
This was a page from the transit solutions: 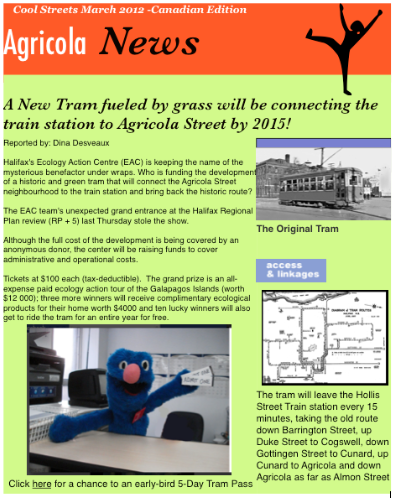 Where do we come from? What are we? Where are we going? 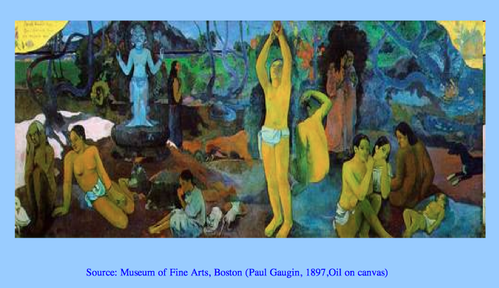 I've haggled with Gaugin's questions, also at the heart of Wright's Massey Lectures called a Short History of Progress, since 2004 (ok, so it started WAY before then).

I recently dug up an old podcast from the Massey Lectures and reread an article from the London Guardian.  Adrian Searle led with these words:

"Paul Gauguin: guilty as charged Colonialist, chauvinist, exploiter . . . Gauguin may have been all these things and more – but, as the Tate's brilliant new show reveals .  . ."

"... it was his faults that made him great"  Well, I'm relieved - if it's true, I should be nearing sainthood by now!!

I may have a hard time with some of the biographical facts of Gaugin's life, but I'm still left to struggle with his all-important timeless questions:

Community Design 2
Are we designing Halifax or is Halifax designing us? 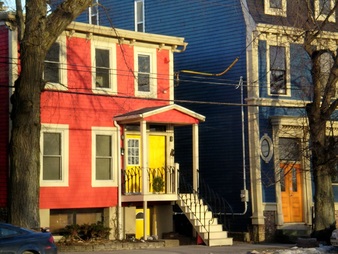 I spent the 2012 winter semester studying the Agricola Street neighbourhood where I used to live in eighties, on Moran Street, and later on Macara.


I took the photo (left) just as the sun was starting its descent. Situated across from the Halifax Oval, these colourful doors of North Park greet downtown folks heading to the North End. 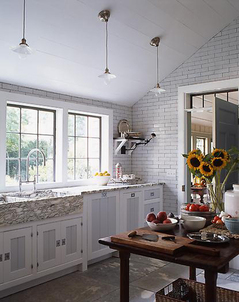 The Maritime Urban Challenge: As Maritimers move to the city for opportunities they face kitchen spaces which tend to run smaller than country kitchens.  Why a design challenge? Ask them about home and Maritimers are bound to tell you about a kitchen party eventually (the tradition named after a Nova Scotia habit of parties that always wind up in the kitchen). The challenge:

“Should I add an island in this smaller kitchen and give up the dream of hosting my own country kitchen party?”

Design Solution: The 001: Instrumental can function as an island and as a table. By adapting the style of a farmhouse/harvest table, it provides:

*     A casual comfort that begs you to pull up some extra chairs or stools and linger;
*    The flexibility of a prep station;
*    Storage (inside the barrel) as well as a rack for instruments (adapts well to pots also).
Design team: Brad, Christine, Lucas & Dina

If you live in the city, but you like hosting kitchen parties, you can still get that vibe! 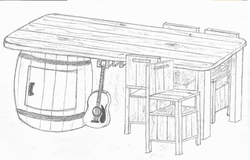 The 001: Instrumental is made locally of 100% recycled barn boards.


The 001: Instrumental is an investment that will pay in the most important dividends:
Time spent gathered with great people, great food, and making great memories. 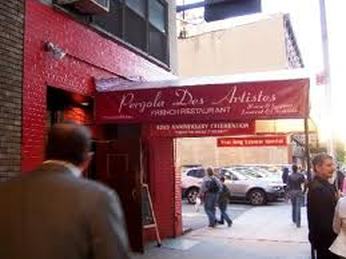 SERVING UP SHELTER
A new concept restaurant for Agricola Street

In Canada, the national discourse about urban transformation is in its infancy. For years, promoters insisted that regional cultural landscapes in Canada were part and parcel of a national identity full of "nature-loving, outdoorsy culture". (Florida, 19) Yet, this vast nation of mountains, forests, and yes, snow, our Canada of wilderness and wildlife has been quietly transforming into an urban society divorced from wilderness. Choosing Gehl's article rather than one of Dr. Florida's (who recently moved to Canada) might raise an eyebrow or two, but there can only be one best source.  Lord Richard Rogers asserts:

Cities — like books — can be read, and Jan Gehl understands their language. The street, the footpath, the square, and the park are the grammar of the city; they provide the structure that enables cities to come to life, and to encourage and accommodate diverse activities, from the quiet and contemplative to the noisy and busy. A humane city — with carefully designed streets, squares, and parks — creates pleasure for visitors and passers-by, as well as for those who live, work, and play there every day. Everyone should have the right to easily accessible open spaces, just as they have a right to clean water.

That right to such spaces is what Gehl examines in Copenhagen street's transformation—from parking lot to town square—where he identifies societal patterns that impact our physical use and transformation of landscape including patterns of transportation, consumerism, household size, and work versus leisure time. Copenhagen is a northern city that offers compelling insights into how Canadian urban spaces are, or could be, evolving. In fact, similarities between Denmark's and Canada's evolving urban patterns, climate challenges and societal pressures are quite striking. 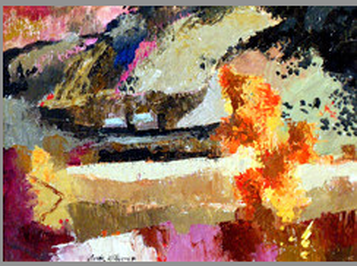 Most folks who have heard of the Doryman Tavern (in my hometown of Cheticamp) may associate it with one of Cape Breton's most talented artists, Ashley MacIsaac. There is, however, a relatively unknown artist whose paintings hang on the walls of the Doryman called Sandy Harris.

Through Harris' paintings and through the story of how they ended up hanging on those walls is a story about a culture of survival that is part of the Cape Breton identity and thus Canada' s national identity.  [i wish I had a Harris image, but I posted another favourite painting of the Highlands in its stead].

The Chronicle-Herald says we're facing (yet again) the question of survival in Cape Breton. . .


And it looks like I can't stray away from this topic for too long before it finds me again and nags me.  For this reason, I'm thinking of putting all of my resources into two years of thinking about this issue. . .Thesis Key words:  Survival, regional cultural landscape, national identify, heritage values & policies, spectacular beauty, etc.