Serving up Some Shelter 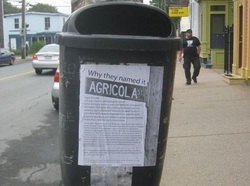 The summer of 1818 saw a 4-year series of 62 letters appear in the Acadian recorder newspaper, all signed Agricola. Agricola sparked an agricultural movement in 1800s Nova Scotia. Though the anonymous writer later revealed himself as John Young, it is his pen name that survives in the name of Agricola Street

* A century later, Agricola Street was damaged (though not destroyed) by the Halifax explosion.

* The neighbourhood's future would be further impacted in the 1970s by the building of the Cogswell Interchange.  The construction created another barrier (the obvious being the Citadel) between Agricola and the downtown waterfront.

* Throughout these changes, most of the residential buildings remained though many were converted into rooming houses, apartments or small businesses.

* Demographic composition, however, has been changing in recent years, including a higher proportion of artists and entrepreneurs.  Although, it remains a working class neighbourhood, with a mix of low and higher-middle income residents, artists and young professionals, there's a whiff of change in the Agricola Steet air. . .

* The corner of Agricola and North streets is a microcosm of the neighbourhood - each corner representing an integral aspect of Agricola's past & present.

* To our knowledge, there's no formal urban renewal project in the works for Agricola, but the street has seen increasing signs of gentrification as Fred's (hair salon and art gallery) sphere of influence extends in both directions.

Photo: Dina Desveaux
January 2012
Our group began our quest for shelter at Gus' Pub, across from Fred's at the four corner microcosm.


Although we initially walked north toward Lady Hammond, we were drawn toward the area between North Street and the Halifax Commons where the presence of cafes and shops has done much to create the vibrancy and edgy personality that Agricola is known for.

The site we settled on looks out onto one of Agricola's iconic and colourful streetscapes (below). 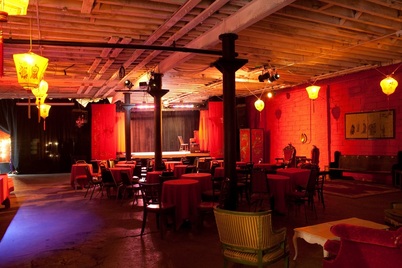 Source: redlotusroom.blogspot.com
In establishing our new concept restaurant, Abri des Artistes, we hope to honour the history of Agricola (John Young) by sparking another agricultural movement that will see food security and shelter as a bridging concept to bring communities even closer together.

The sense of shelter is twofold: While the location feels sheltered, 100 per cent of the profits will go to shelters for abused people and animals.

The space will have one foot in a sleek-designed ultramodern concept, and one foot in Agricola's more traditional, sheltered existence, both geographically and temporally.