From the latest story I've been working on, DANDELIONS.
Introducing:
Ralph Fitzpatrick.

Heidi recalled her disbelief when he'd told her he was turning 65. She'd pegged him at 50 max. When asked his secret, Ralph would say there were many, but one thing for sure, he considered his morning bourbon and his evening bourbon a sacred ritual.

That was thirty years ago. 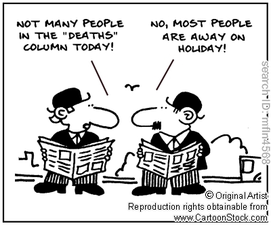 Better yet, someone kicked the bucket for him.

On February 8, 1929, Ralph Fitzpatrick tore through his poor mother’s uterus, the first of a long list of cruel acts he would inflict on her, and later on others. It was the coldest day of the Depression in Wyoming when Mavis and Billy-Joe Fitzpatrick first glimpsed their son, face like a slapped arse and smelling funny. Billy-Joe circumcised Ralph with a rusty pocket knife and then doused the prick with bourbon to ward off infection.

I’m happy to report that Ralph was deprived of his final wish, which was to be run over by a bourbon truck while heading for his date with a virgin, or maybe that woman from way back, the one that got away. Sadly, the knife used to inflict the 13 stab wounds was probably too sharp to make his death as slow and painful as he deserved.

Bottom line: Ralph was about as useful to society as an ashtray on a motorcycle.

His only redeeming quality was his skill at grilling a mighty fine bourbon burger. In his will, he asked to be mixed with equal parts bacon fat and bourbon and then broiled. He’ll be cremated tomorrow following a funeral service he ordered for happy hour, 5 pm at Rock Church, 222 Sackville Drive. A barbecue will follow at an as yet undisclosed location.