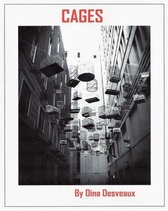 The woman who faced imminent death snapped a mental image of her surroundings.

To the right, the sky was the same blue as her mother’s eyes.  In the foreground, gold trimmed clouds lingered next to the most luminous reds and oranges of the sunset, as if birds were shedding their feathers into the shimmering waters below.

To the left, the trees danced slowly, half lit in red organza dresses.

The freak wind came from nowhere.  One gust lurched her body to the right.  Missing the trees, the woman clutched her stomach, squeezed her eyes shut and plunged feet first into the frigid water.  As her entire world turned to darkness, two words screamed through her mind:  My baby!


Photo on the cover Floating Cages
by ~missdanger Photography / Street

Many years had passed since Sabine Poulain (inside her mother’s belly at the time) sensed rather than heard the scream, but it swayed her life in ways she couldn’t begin to imagine.

By times her mother's scream would hang like that, muffled, yet breathing in her body’s memory; other times, the near-memory panted, bent her will, and led her by the nose; but on certain fall nights—like the night she began to recount the story—Sabine could feel the scream reaching the pitch of fingernails screeching across an old schoolhouse chalkboard.

There was no question in her mind that there was more to her mother’s scream than the fear of losing a baby.  And, Sabine was determined to find out what that was.  In addition to a shock of thick, dark hair, a number of curious phobias including balloons, heights, and large bodies of water, Sabine’s wild ride in the womb had left her with a gift of foresight.  It had also instilled a deep instinct for survival.

And so it began one evening—a chilly evening for so early in September—that several friends gathered over a potluck dinner and later wine, in the cozy kitchen with butter-coloured walls in Halifax, Nova Scotia.  As the friends inched their chairs closer and her restless hands flew in the manner of her Acadian ancestors, Sabine began to tell the story of an ordinary young woman from Cape Breton who, for a brief moment in time, believed she was meant for an extraordinary life.

By the time the stew of fall harvest vegetables sat steaming in front of her Sabine was chewing her bottom lip. She could feel herself slipping into old nervous habits and had gotten distracted in telling her friends about a storm unlike any other she’d witnessed in Chéticamp.  Chéticamp was the village where her mother had grown up.  Sabine took a swig of wine and continued.

“Have you ever heard of those suètes that blast through the Highlands?  I watched a gust once slam the church steeple in my Mom’s hometown—it made the oddest squeal.  Not exactly the sharpest knife in the drawer, I was sitting frozen next to a window watching this tree coated with millions of tiny birds—”

Fat with leaves, the tree had strained until one whole branch began cracking.  Birds flew madly in all directions.  The cracking grew louder as another branch severed from the tree.  And then another.

"I couldn't take my eyes off the destruction."

Was that the sort of violent dismantling her mother had glimpsed in her mind’s eye the day she’d plunged into icy waters thinking she and her unborn child would surely die?

At dawn in Chéticamp only the tree trunk remained.  Shadows disguised in rain slickers arrived later to chop the rest of the trunk.  In the end, a gaping hole in the ground disappeared, the earth filling herself up.  It was as if the tree had never been there.

Sabine admitted to her friends that she felt overwhelmed with an inexplicable sadness whenever she thought of that morning she discovered that the tree was gone forever.

In the weeks and months that would follow the potluck dinner, also Sabine's summer holidays, it seemed there was nothing she could do to make that heaviness in her heart go away. She spent two months in her mother’s hometown digging, all because of a box she’d found the morning after the dinner.

It was a box of folders, each folder neatly stacked and dated.  She’d opened the folder dated 1937 and begun reading about a group of elementary-aged children who went to a school situated next to an important tree in a Spanish town Hitler had bombed.  At first Sabine didn’t think the village of Guernica could have anything to do with her or her mother.  But as she kept reading the edges of the story began to blur, then bleed and seep into her mother’s story and eventually tried to settle inside Sabine.  That was when the pitch of her mother's silent screaming reached inside her core and sliced a frozen part of her. As it wedged free, Sabine was reminded of that grinding sound in the Spring when the ice floes in the Cheticamp harbour would start breaking up.  Its fervour left a silent wake of violence mistaken for love.

But Sabine heard echoes beyond the silence, mournful blasts from an old fog horn, as if all the unrequited lovers throughout history were raising their voices from the cracks in the ice, ocean spilling, a well of grief and stolen innocences calling out to one another.