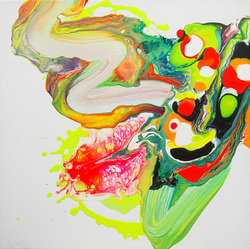 Hortal
The 1% meanwhile were stumped on how to deal with a leaderless movement committed to nonviolence - it seemed for awhile that it would be impossible to grasp mentally using conventional & corporate ways of thinking.  A spreadsheet simply couldn't come up with a solution.  That would require creative thinking...not so easy in a world that is so consumed with branding that no one actually has to think about anything anymore - they simply look for answers in a brand guide.

Some have criticized and ridiculed Occupy for its lack of clear demands and it leaves me wondering what these critics are doing to make the world a better place for those who are marginalized.  If they are criticizing from a homeless shelter where they are volunteering then perhaps that is a valid criticism, but that's not where the major criticism seems to be coming from and that speaks volumes to me.

Just because you don't understand something doesn't make that thing wrong.  That was the sort of thinking used to excuse institutional racism.  It's also the kind of thinking that would have denied the beauty of a painting like Hortal's (above) during certain historical periods.

I, myself, struggle with the 'us' & 'them' part of Occupy and also with the word 'occupy' because of the connotations attached with colonialism and how Indigenous people have been treated, but these are semantics that stem from an obsessed wordie - that's me.

I struggle with us/them because the idea that we are separate from the rest of the world is a deluded view.

So here we are, two months in, and still living in a corporate-dominated world - a domination that has produced a culture of greed, materialism and maybe most importantly, ALIENATED FROM NATURE.
[something the occupiers, at least, seemed to be connecting with]

In closing, I turn to another one of my muses, my Dad.  What would he have said?  Well, before saying anything, he would have been asking the first occupier he met:  "So, who's your father?" and "What brought you out here now?" and "Can I offer you a meal and a warm bed?"  That's why my Dad never would have made it anywhere near the 1%, and anyone who met my father would have no doubt, even if he'd made the 1% he would have definitely given it away.

Too bad the world doesn't have more Jimmies!
Have a good one,
TartanFrog