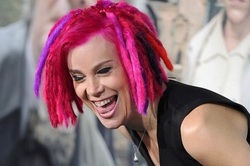 Photo: zimbio.com
To begin constructing change, we must listen with our hearts.

Lana's experience in grade three, in grade eight, in grade ten, and throughout her life left me with a wish:
Starting today, may millions of us don those magical 1970s square glasses through which we will see human hearts instead of the capsules that hold them.

And remember Lana's words:
"I don't know why he wouldn't look away, all I know is that because he didn't I am still here."

Here are my other top 10 favourite Lana quotes:

4. "Every one of us, every person here, every human life represents a negotiation between public and private identity."

5. "Anonymity allows you access to civic space, to a form of participation in public life, to an egalitarian invisibility that neither of us was prepared to give up."

6. "Parenthetically, this is a word (transition) that is a very complicated subject for me because of its complicity in a binary gender narrative that I am not particularly comfortable with."

7. "The cathartic arc of rejection to acceptance without ever interrogating the pathology of a society that refuses to acknowledge  the spectrum of gender in the exact same blind way they refuse to see a spectrum of race or sexuality."

8. "If I had remained invisible, the truth would stay hidden, and I couldn't allow that."

9. "Knowledge had an actual materiality, not unlike the materiality of a ladder, that could be used to gain access to places and worlds that were previously unimaginable."

10. "And every morning I get to wake up beside her, I can't tell you how grateful I have been for those two blue eyes in my life."

And even if I don't (usually) condone violence, I just gotta add this last one:

"My brother quickly stepped in. Look, just so we're clear, he says, if somebody asks something or says something about my sister that I don't like, understand I will break a bottle over their head. Few words express love clearer than these."


Thank you Lana for sharing your wisdom at the expense of your anonymity and privacy.
Your actions define global citizenship at its and I felt humbled by your graciousness.

Here's to climbing to the worlds that  have been (and will be) previously unimaginable!!