Planning to visit places (or the artwork) in PAPILLON?
[page in progress]

1. In the opening chapters of Papillon, the character of Sabine tells us about the fictitious village of Papillon:
"My mother, Isabelle, and my grandmother were born in a tiny French-Acadian village in Eastern Canada. It’s such a negligible speck that you can’t even find it on Google Maps. The place is called Papillon (butterfly in English), and it’s unlike any other village I know. It's the polar opposite of Paris, where I was born, with the single exception being the presence of similarly eccentric characters.

In Papillon, however, eccentricity seems amplified by isolation, reminding me of the process whereby millions of years of pressure on coal produces a diamond. This pressure of isolation can compress eccentricities into pure gems of madness."


Yes, there's a piece of us in every character and while writing about Sabine, I was reminded of those foggy days standing on the wharf watching my father's fishing boat, first shrinking, then disappearing beyond the horizon. The photograph below (from the Shutter Sisters) reminds me of those moments—interrupted mostly by seagulls—where I aired out my dreams. That's where my dreams were first exposed to the call of the birds circling above. 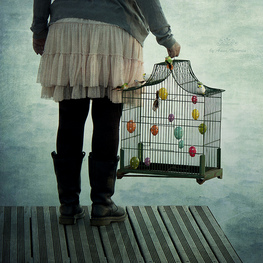 If you ever feel the need to let your dreams take in a breath of fresh air - consider heading to Cape Breton where I grew up - there are too many places along the coastline to mention one only. Perhaps it's best if you just show up and let the place find you!

"The Spanish struggle is the fight of reaction against the people, against freedom. My whole life as an artist has been nothing more than a continuous struggle against reaction and the death of art. How could anybody think for a moment that I could be in agreement with reaction and death? ... In the panel on which I am working, which I shall call Guernica, and in all my recent works of art, I clearly express my abhorrence of the military caste which has sunk Spain in an ocean of pain and death."

If you are planning a trip to Madrid, go to the Reina Sofia Museum. Or, visit their website at: http://www.spanisharts.com/reinasofia/reinasofia.htm

3.  Villa Rose, now a Paris Hotel.
In the first section of the book we read a newspaper article about a 2005 break-in at 19 Rue du Depart where a Diego Rivera painting and a woman with amnesia go missing from a famous art salon.  In this photo, we see the front of the building, now a hotel in Paris. 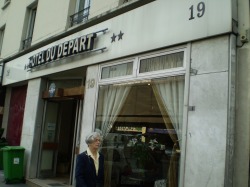 4.  Cafe Charbon, Paris
In a later chapter, Anouhea shares a liquid lunch with her friends Antoine and Mimi. My husband and I shared our own liquid lunch there in September 2009. 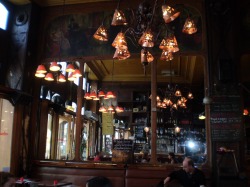 5.  Sabine follows the manuscript to Paris
During the whirlwind taxi tour of Paris, the driver pauses at the Palais de Justice (which used to be the Royal Palace).  Above the doors, the slogan of the Revolution reminds us of the past.  See below for close-ups. 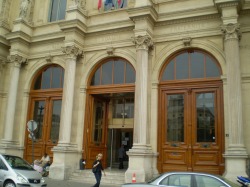 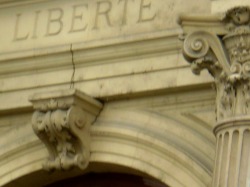 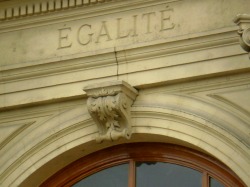 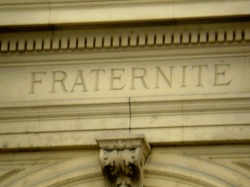